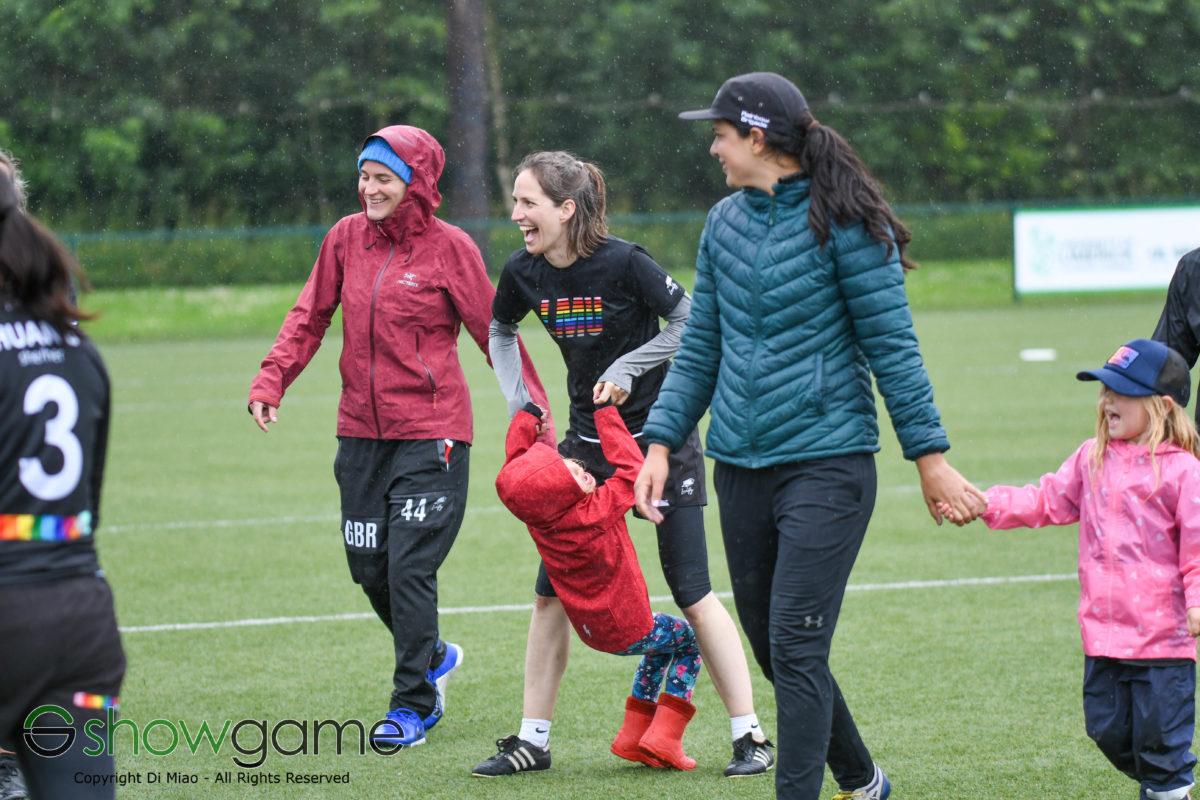 Walking around the pitches here at WMUCC it’s typical to see a kid on almost every sideline. Sometimes they’re wearing the kit of a parent’s team; sometimes they’re exhibiting impressive throwing skills. What happens to the kids when the parents are playing ultimate is an especially relevant issue here at WMUCC. The tournament organisers in Limerick have provided a clever way to help parents out.

In partnership with Adventure Worlds Camps the tournament organisers have arranged for a holiday camp to run from 9.30am to 3.15pm from Monday 27th June – Friday 1st July. It’s based right here at the venue in the University of Limerick Sports Arena and costs parents $115 for the week. This initiative is a great way to help parents out and increase accessibility, allowing more players to come, and bring their family with them. This got me thinking, though, how are parents coping with playing and watching the kids? Earlier today I spoke to a few people to find out.

This morning I found Evie Dirgo with her one-year-old son, Leo, supporting her husband, Andrew, who players for the Canadian masters open team Carbon. I asked her how it had been going so far having Leo at WMUCC with them. “It’s been going well so far. We’re staying in the dorms here at the venue and being so close to the fields is a big help,” said Evie. She went on to explain that she “was nervous at first about the dorms because [she] was concerned that being a non-player they wouldn’t be able to book it, but that was all fine.”  She also told me that there was another parent who has brought his child, so they weren’t the only ones on the team.

I then asked her how she thinks becoming a parent affects people playing sport. “It generally stops players continuing because sport becomes less of a priority. I also play ultimate and my first tournament back after having Leo will be Canadian nationals later this year, where both Andrew and I will be playing.” Evie also told me that she’s keen to get Leo involved with the sport as he gets older. He is currently too young for Evie and Andrew to put him in the holiday camp, but Evie told me she thinks it’s a great idea and that they would certainly make use of such an initiative in the future.

Later I spoke to Alex and John Davidge from South Africa who both play for Chilli Legends. They’ve brought three kids, aged 5, 8 and 11, with them and described the experience as “an adventure” for all of them. “The kids bring lots of spirit with them. It’s also the first time for them doing lots of things, like going on a plane,” said Alex. Their kids will all be going to the holiday camp tomorrow, which they are very excited for. John explains that having kids “makes playing sport harder not just because of the time you need to look after them but also because of other costs like babysitters.” Although they weren’t able to stay at the venue because there weren’t any family rooms, overall, John is very positive about everything the tournament organisers have done to facilitate bringing the family. “[This tournament] has a completely different feel to London 2016, where we were discouraged from bringing the children onto the pitches,” he said.

Finally, I chatted with Leila from Southern Charm, who had come with her 10-year-old daughter Zoe all the way from the US. “I have two kids and I gave them the choice of coming. The younger one chose to stay at home with her dad, but Zoe wanted to come with me” she told me, while Zoe was off playing with some other kids on the side-line. Leila also said she thinks it’s “great for her to see her mum playing, whilst spending the day outside and also meeting some other kids.” She hadn’t heard about the holiday camp but thought it was a good idea and would definitely be helpful to parents when they’re playing.

It’s clear from talking to parents here today that childcare provision is an excellent idea. The holiday camp starts tomorrow and is lined up to be a great success. It would be fantastic to see more initiatives like this at all tournaments going forward. Above all, if it allows more people to play ultimate, then it’s something we should all be supporting.

The match between Kisumu and UCT Flying Tigers was significant. Sean Colfer explains why.

Two teams facing each other in a pool on day three of a tournament is usually nothing that would be considered too significant, given how much of the week is left. However, the match-up between UCT Flying Tigers and Kisumu Frisbee Club was not an ordinary match. It was the first time that two African teams had ever met each other in any Ultimate World Championships.

END_OF_DOCUMENT_TOKEN_TO_BE_REPLACED

Sean Colfer spoke to six of the Neals to find out what it’s like being at a tournament with your family.

One of the best parts of covering any international tournament is seeing the joy relating to anything outside of the Ultimate. The new friendships that are forged, the unforgettable moments experienced between games and the pride of representing a club, team or country on such a stage are all indelible parts of any world championships. One aspect that’s always been a personal favourite of mine; watching parents enjoying their children’s games.

There are several kinds of Ultimate parents. There’s the parents that have played themselves; those are pretty rare. There’s the kind that have absolutely no idea what is going on but find the mix of athletic prowess, throwing skills and raucous team spirit intoxicating and enjoy it nonetheless. There’s usually quite a few of them. And then there’s an increasingly common kind – those who have seen so much Ultimate that they take on some knowledge by osmosis and begin to understand exactly what they’re watching. Two parents that fit very snugly into that bracket are Terry and Raymond Neal.

END_OF_DOCUMENT_TOKEN_TO_BE_REPLACED

On the weekend of the 29th and 30th of March 2014, I competed in my first Tour event: Mixed Tour 1 in Cardiff. Playing for Sheffield Steal 2, a promising weekend saw us finish 47th. For me though, playing the event was not about the result, it was the product of years of rehabilitation and hard work to be able to compete as an equal.

I started playing Ultimate in September 2009. After meeting a friend who played during the first year of my degree at University of Sheffield, I decided to take up the sport at the start of my second. Fondly christened ‘Jebend’, I played an indoor beginner tournament in Manchester. Unfortunately, this was the first and only tournament I played as an able-bodied player, and persistent pains in my knee throughout the weekend meant that my involvement in the tournament ended prematurely. However, I had caught the Ultimate bug.
ray ban clubmaster eyeglasses
END_OF_DOCUMENT_TOKEN_TO_BE_REPLACED