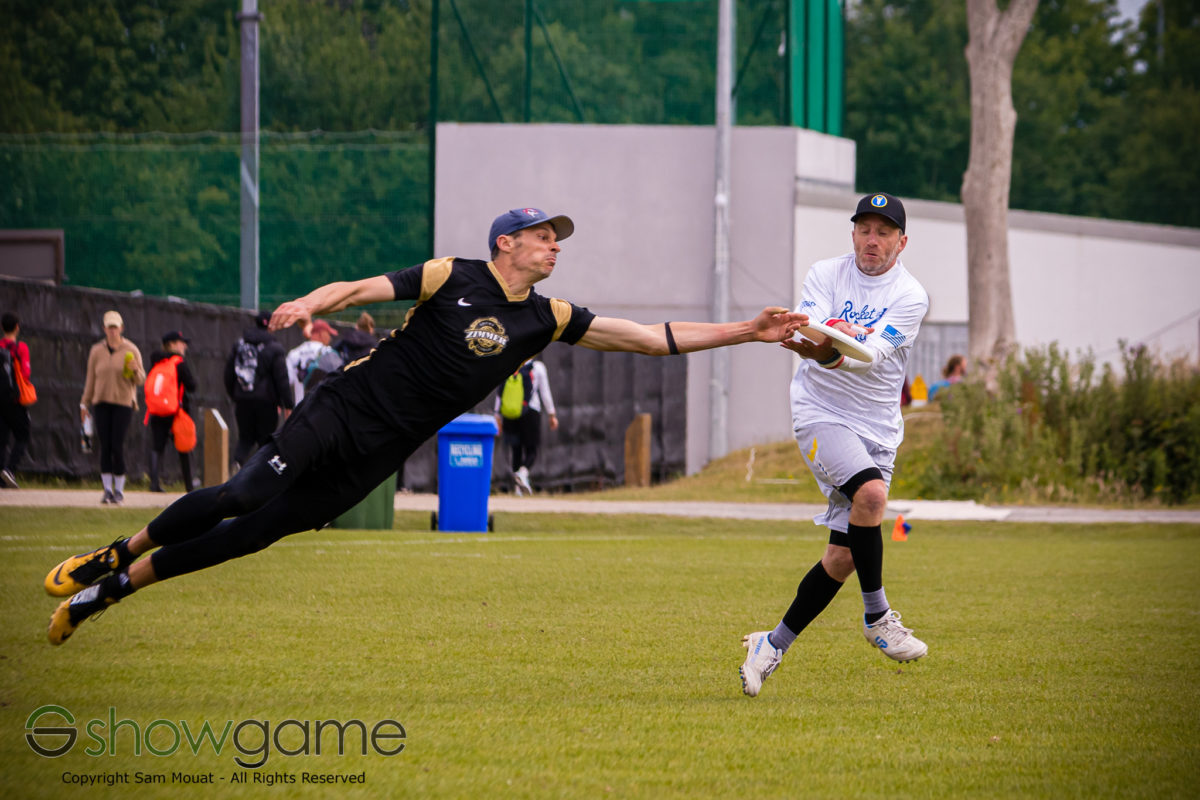 The British grand master open team, Zimmer, had a successful run of games in Pool B. They lost only two matches and won their other five to put them third in the pool and qualify them for the quarter finals. Yesterday their hopes of making into the semi-finals, however, were ended after they lost the American team, and original top seeds, Johnny Walker.

The game started well for Zimmer. They came out on defence and, although they were unable to turn Johnny Walker in the first point, they very quickly equalised thanks to a bid from David Sealy. The next few points were quite quick, with the two teams trading until 2-2.

Zimmer’s James Cooper managed to intercept an attempted inside forehand break, giving them an opportunity to break. A deep shot went up, with Dan Berry chasing after it and getting the score to put Zimmer ahead for the first time 2-3.

Several more points passed with both teams holding their offense points. Zimmer were disciplined in their horizontal stack, while Johnny Walker stuck to match defence. At 5-6 up, Zimmer got another opportunity to break when a Johnny Walker player dropped the pull. Zimmer’s defence line then called a timeout, which allowed them to set up an endzone play when they came back in. They isolated Dave Barnard, who received the disc from Lewis Glover to give them their second break and put them up 5-7.

Still on defence, Zimmer decided to play a zone which was unsuccessful at slowing down Johnny Walker’s offence, who put in two points with back-to-back scores from Brian Carroll, levelling the score again at 7-7. Zimmer put in the next score to take half at 7-8.

After half, Zimmer scored the next one thanks to an impressive toe-in from Thaysen, re-establishing the two-point lead at 7-9. After this, however, the tide really started to turn against Zimmer. Their zone defence seemed to be leaving too much free space in the middle and the Johnny Walker players cut through it easily to score the next three points, putting Zimmer behind, 10-9, for the first time since the first couple of points.

Zimmer had only 18 on their roster compared to the 24 Johnny Walker had brought and at this point in the tournament many were nursing injuries. This showed as it seemed the Zimmer players were running out of energy. They only scored two more points in the rest of the match, which was closed out after several more breaks, with a catch from Mitch Schminke to leave the final score 15-11 to Johnny Walker.

This left Zimmer in the 5-8 bracket, while Johnny Walker progressed to play in the semis yesterday against Surly GM.