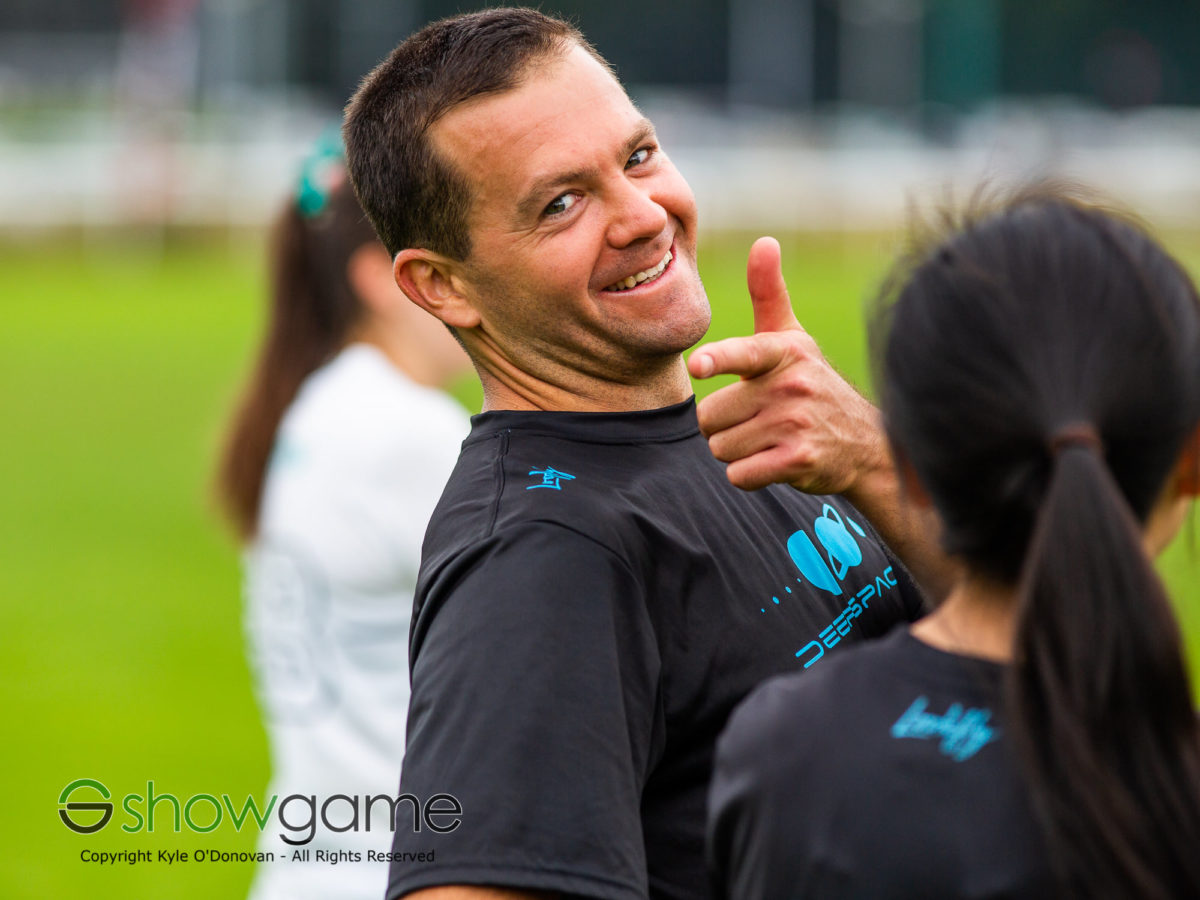 Marius has been around UK ultimate for a long time, playing well on good teams but never featuring on a team considered one of the top teams in the division (despite winning a mixed national title with Birmingham in 2014) until recently. That lack of visibility and access to the top of the sport has meant that he’s one of two players not to have played for a senior GB team in this squad, with the other (Molly Wedge) only moving to the UK recently. So how did such an experienced, and simultaneously relatively inexperienced, player reach the level of training with the top team in the country?

Starting out at Birmingham university

Marius first heard of ultimate when at high school but the version that he and his classmates played was a long way from how the sport actually works. He sought out the ultimate club at university as soon as he arrived in Birmingham to play a more social sport than swimming, which had been his main focus until then. At Birmingham the team developed during his time there, with the mainstays of the team that would go on to become arguably the best university team in UK history all starting during his time there (including World Games squad-mate Ben Burak).

He played for EMO for one season but largely played with Leamington Lemmings until Birmingham Ultimate started in 2012.

“I had labs on Wednesday afternoons, and EMO trainings in Leicester were on that day. After one season with EMO 2 I didn’t really have time to travel so that’s probably why I started playing with Lemmings, until there was a Birmingham shift.”

The shift that Marius mentions is the founding of Birmingham Ultimate, a club team in the second city. It meant that the best players from the city and the surrounding areas had another option instead of travelling longer distances to other teams. The team became competitive quickly. However, it was a tough grind to get to where they thought they should be:

“We felt pretty hard done by coming up the ranks. We saw teams that were formed only for a year or two jump into A Tour and just be given a higher ranking. We felt that we were always pushed down because we didn’t have bigger names on the squad. It was quite a graft but we got to the point where we, after a Saturday, were the top seeds of A Tour. We went to Euros in 2014 after winning mixed nationals, albeit in a down year because some of the big teams didn’t play. That was our peak year.”

After moving to London, Marius stayed with Birmingham because his friends were still on the team. The next season he played open with Ka-Pow! but continued to play mixed with Birmingham. In 2020, though, he moved to Deep Space.

“I had a lot of untapped potential in terms of how far I can go in the sport despite being relatively old compared to some other people coming onto the scene. I wanted to play very competitive Frisbee for a team that was close and I could train regularly and be active within the club.

“But the other thing was that I was holding some development back at Birmingham. If I continued to pick up for them at tournaments, I was taking the roster spot of someone who had been developing and coming up through the ranks. At that one tournament, we might do better with me than someone else, but having someone who’s ingrained in the club, the training and the culture will be better in the long run. I felt like I was holding them back.”

Elite mixed teams in the south

The move to Deep Space meant that Marius was now on one of the best teams in London, a team with more visibility in the city with the most ultimate players in the country and where a lot of top players live. After one season with Deep Space, and a nationals final appearance, Marius moved west and is playing with Reading this season. So what was the change in moving to these teams and getting more recognition, was it a renewed dedication to training or extra fitness work?

“I think part of it is that visibility. When I first applied for under-23s (in Toronto, 2013) I wasn’t even given a trial because I didn’t play for a club in the top five. I’ve never had a Clapham trial, although that’s probably a different story, and the first trial I was ever given for a GB team was in 2018 for the 2019 cycle. That was after I moved to London, so I think just being in the London community and going to goalty with people who are in management set-ups, being known a bit more by people who have seen my face around, was the biggest advantage.

“In Birmingham and in some other regions you’re at a disadvantage because you don’t have some of the exposure that you do in the London community.”

As mentioned above, Marius had no expectations going into the first trial.

“I wasn’t too bothered with seeing what happened because I was going in to learn. I obviously wasn’t going to make the team or even the training squad so I wasn’t even planning on filling out the form, I filled it in with two days to go because someone said what’s the point of not filling it in and missing out on a good training session if that’s all it is.

“Because I had no expectation on my shoulders I played really comfortably and did myself justice. I came out of the session thinking I had shown I could play and I had learned some things, bad positioning or a throwaway that gets punished much more at that level, but I came away thinking I could hold my head high. When I got an email inviting me to the closed trial I was pretty confused, to be fair!”

Only around 40 people were invited to the closed trial, about 20 male and 20 female-matching players. At that point, the odds of someone making the team are much, much better.

“That was eye-opening, and I thought I may as well give it a go. I did a lot of work over the next three months. Tom Abrams was really useful, we went and did a lot of throwing sessions and just talking to him was valuable. I find at club trainings you talk a lot about minutiae that don’t matter and he’s very keyed into what matters, so that was useful.”

The closed trial in Edinburgh took place while there was a storm going on, so it was all held indoors. Marius believes that was an advantage for him. His mentality also helped at that session:

“I think some of the Clapham boys, especially, are better in tough conditions. They have an advantage, because of the amount they train and the graft they put in, when it gets windy and rainy. And then I still had no expectations, now I could just go and ball out. If I learned stuff, great. If I proved to myself that I might have a shot at the 2023 Euros season with GB then great, and it was visibility again. After the session I thought I played pretty well. I had a couple of regrets but the rest of it I was pretty pleased with. I threw five deep shots for goals and four were to Rachel Naden, so I think she got me on the training squad!”

On the training squad

Once the squad was decided, the emails went out. Marius’s email was not the one that everyone was dreaming about, he wasn’t going to be heading to Alabama to represent GB, but he was asked to be part of the training squad. So how did it feel receiving that email?

“I felt proud. I have some screenshots on my phone of when that email came through and when I was added to the World Games squad WhatsApp group and I was like this is unreal. I felt very proud of myself, it was some validation that I hadn’t necessarily been looking for. I don’t need other people to validate the fact that I think I can throw Frisbees well, but it was a really good feeling knowing that people think you can hang at the top level of the sport. There was some element of thinking I didn’t respect the fact that I had a shot at the team, I was closer to the top level of competition than I thought I was.

“On defence I struggled, I was run ragged at times. Against the USA and Canada I would have struggled, but on offence I actually held by own quite well. I’ve learned some things about myself physically that I will be working on over the summer, going to sprint training and stuff to try and rectify at least a small part of that. But I look at some people and think if I had worked like they have over the last five years, to the extent that some of the Clapham guys like Brooksy [Alex Lakes] have, I would have had a good shot at making the squad.”

The process has been such a quick one, with the team having a very short time to work on tactics, cohesion and execution. Marius decided to take on a specific role to help the team be as good as it could be:

“I wasn’t there thinking if someone gets injured I might go, I wasn’t there hoping to go to Alabama. I was there in my position to whatever I could to help this team succeed. My best way to do that is to be competition and push at trainings as much as possible. Sometimes I failed at that, but I think over the course of the process I got better and I learned a lot. One of the most important things about the cycle was how quickly the team had to adapt to certain situations. We would discuss a new zone at the beginning of a session, walk through it with cones, do five pull and then that’s it, moving on to something else. Being in that environment where learning is quicker and a lot is assumed meant it was picking up experience really quickly.”

So now the process has come to an end, and the team is in the other Birmingham. How will Marius feel when his teammates step onto the field?

“I am a little bit nervous but I am confident that they will represent really well. There are people on that squad that I didn’t know when this process started and now I’m friends with most, if not all of them. Everyone has their personalities and understanding that, feeling what they feel and empathising with them makes the viewing experience better. I think I have a unique opportunity to feel what they feel through the screen. I’m going to be proud of them watching and I’m really hoping they do well.”

Now with the rest of the season on the horizon, Marius reflects on the experience as a whole:

“It comes with pros and cons, my body is a bit more damaged now than it would be if I hadn’t done some of the GB stuff. But the cons of not letting my body heal between Reading and GB sessions are massively outweighed by the pros of what I’ve learned and been able to garner throughout the cycle. It’s been a really positive experience and will help for WUCC and Nationals this season and then next season, when I think I’ll be having a push at the next GB cycle.”