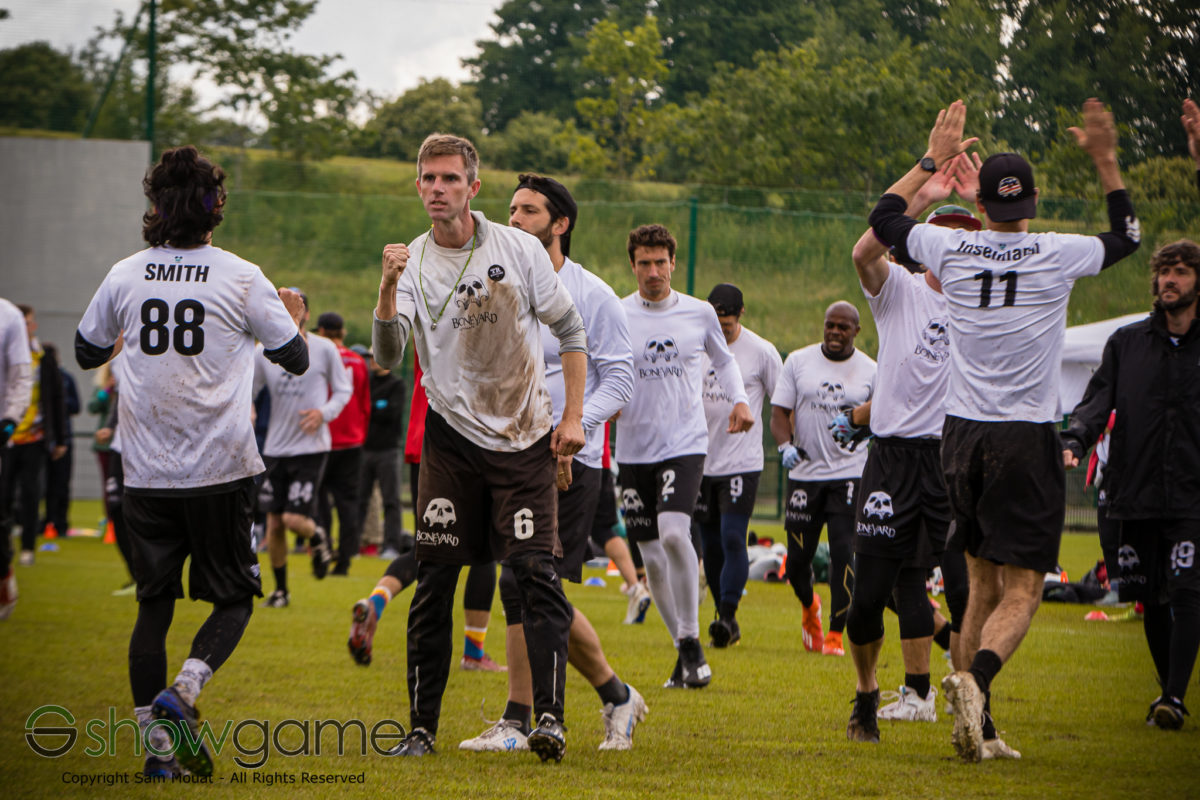 The games have now finished at WMUCC and the winners have all been decided. As we’ve seen a number of times, the winners all came from the USA along with several of the runners-up.

The finals that happened yesterday saw Surly win a double in the great grandmaster and grandmaster open divisions but fall short of a treble as the grandmaster mixed team lost 15-13 to compatriots Molasses Disaster. The mixed final was an extremely clean game with only one break, Molasses snatching the momentum going into half up 8-6.

In the grandmaster open division Surly won 15-3, a dominant win over Canadians FIGJAM to seal an incredibly impressive title. Surly finished with 10 games played, 149 points score and only 52 conceded, with no-one scoring in double digits against them. The great grandmasters won 15-12 against top seeds Relics in a game that saw several big lead swings; Relics scored three in a row to go up 9-10 but then conceded three Surly points in a row as the Minnesotans went up 13-10 and maintained the lead to win.

Today, the three finals were in the masters mixed, open and women’s divisions. The mixed final was more of a procession than spectators would have wished. Descent, the team from Washington DC, has seemed like the strongest team in the division all week and proved to be so with a dominant 15-6 win over Canadians Epoq, more of a surprise finalist. The Americans took half 8-1 after going up 6-0, effectively ending the contest early. Descent’s stars, like Kelly Hyland, Caleb Denecour and Brian Shoenrock, were just too much for Epoq and everyone else this week – they scored 135 points in nine games (hitting cap in every game) and conceded only 38, with no-one scoring more than eight against them.

The open final was somewhat more competitive as Boneyard defeated Volton 2020 15-10. The team from North Carolina broke on its first defensive possession but gave it right back on the next offensive possession. Boneyard went back up 6-4 and from there seemed to be able to bother Voltron’s a lot more than the team from Seattle could trouble theirs. Voltron brought it back to 6-6 but were broken going into half and then back out of it as well, going down 9-6 and never came back within sight.

The closest game of the day was in the women’s final between Reboot Squad, from Boston, and Canadians StellO. The Canadians took a shock lead early on, going up 2-5 after breaking on the first point of the game. Reboot gathered themselves from there, though, and climbed back into the lead with a four-point run to go back on serve at 6-5. Reboot was able to get another break after a StellO overthrow to go into half 8-6. StellO showed admirable mental strength though and were able to have another roll just after half, scoring two breaks and taking a 10-11 lead after a long, turn-filled point. The game was very tight at this point, with every throw contested and some great plays coming from both sides. A simple StellO drop was followed by a brilliant around backhand to put Reboot up 12-11 after they held on the previous point, and the Americans never relinquished the advantage after getting their noses in front. StellO held to take the scores to 13-13 after another long point with opportunities for both teams squandered, but Reboot held their nerve, held their serve and then broke to win the title.

Looking at UK, Irish and European results, Iznogood had the most impressive result in the three masters divisions in finishing fourth. They lost out on a medal after a 15-7 loss to Johnny Encore but making semis is an excellent achievement. Magic Toast finished seventh in the open division, making two European teams in that bracket. LMU and Masterclass both made quarters in the women’s division and met for seventh place, where Masterclass came out on top 15-12. The only European team in the top eight in mixed was Italians Beefire who finished eighth. Reading were the highest-placed UK team in 13th.

In the other divisions there were fewer teams overall but Big Fish, Little Fish finished ninth and as the highest-placed European team (Woodies from Germany finished 11th and otherwise the division was all North American teams) in grandmasters mixed. Zimmer overcame Americans Shadows in the fifth-place game in the grandmasters open division, winning 15-14 after coming from 10-3 down and winning the game on a four-point roll. Flash finished eighth in the ten-team great grandmasters division with JETS from France defeating them to take the best-in-Europe crown.