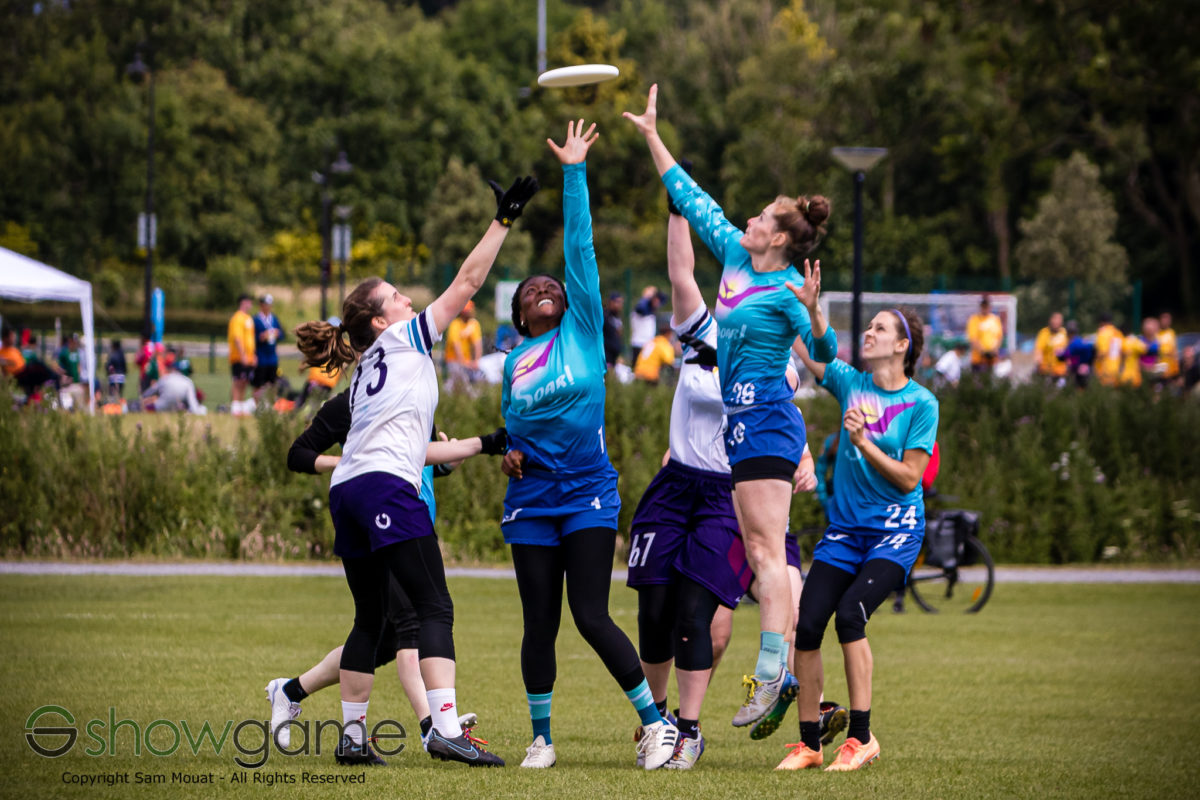 Masterclass, the ‘home’ team here at WMUCC, had a great run to the quarterfinals of the competition. Three consecutive losses at the start of the tournament proved to be the only times they would lose in the pool as they reeled off five wins in a row to take their place in bracket play when it started today as the seventh seed.

Their opponents, the Texans Soar! *sore won pool A despite losing a game. Molly Grey defeated the Texans but lost to Canadians lowercase, who Soar then beat to complete a three-way tie. Soar came out top there and so went into quarters as the second seed.

The game started well for Masterclass with Claire Pugh catching the score for a quick break. The teams both worked their offence well for the next few points until 4-4. At that point Soar started to chip away at Masterclass’s offence and make disc movement more and more difficult. By this point the wind had started to pick up from an already breezy day to something much more challenging, and the Americans seemed more accustomed to dealing with it and were executing slightly better in the gusts.

Two assists from Brooke Woolridge gave Soar two breaks in a row, flipping the advantage from the Irish team to the Americans. Masterclass stopped the rot with a hold for 5-6, but the weather continued to deteriorate. Two long points ended in holds and the teams went into half with the score at 6-8 after another Soar hold.

Half-time saw the wind reach its apex for this game. Pulls from the left side of the pitch were lucky to reach the brick, and movement for both teams against the other zone was tough and attritional. Soar took advantage and punched in another break to extend their lead and snatch away any advantage that starting the second half on O might have provided the Irish. The teams exchanged more holds, with throws taking advantage of the wind proving successful; two loopy flicks that sailed on the breeze floated perfectly into receiving hands in the endzone. The score was now 8-10, the Americans up narrowly but seemingly playing with comfort and calmness despite the chaotic weather.

A fantastic layout catch by Krystina Morris preserved possession against the Masterclass zone and from there Soar seemed to be able to work it around well and scored for a three-point lead. The points were flying by with both teams executing impressively on most throws, but errors seemed to be made in the worst spots giving the other side a short field they could work through quickly. Soar were doing a better job of taking big chunks of yards and leaving themselves less open to those quick scores against.

Just as it had in the later stages of the first half, the Soar D came to the fore. A big attempted Soar block hung in the wind and was caught by Irish hands, but the turn came a few passes later and was slotted home by the Americans giving them the wind advantage. An upwind Masterclass point was stopped with a block by the cup after an attempt was made to thread a throw through and Soar worked the disc nicely to take a commanding 8-13 lead.

At this stage the work seemed done. Masterclass stuck with their zone and caused the Texans some problems but the smooth offence and all-around throwing ability of the Americans proved too much. Masterclass got a block with the score at 10-14 but turned on the first throw, and Soar didn’t look back. Final score Soar! *soar 15-10 Masterclass, and the Americans progress to play StellO who surprised Molly Grey in their quarter.

Masterclass captain Jennifer Kwan was delighted with how the week has gone despite the loss in the quarter:

“We knew it was going to be a really tough game. We were delighted to be in the top eight, just getting here is as well as an Irish team has ever done, but it was a tough game. We started out strong with a break on the first point but then they were just so clinical both upwind and downwind and it was hard for us to claw it back once they got hold of the disc but it was a great game, we loved it.

“The wind was building when we were warming up but it just picked up, it was weird because the downwind discs were floating rather than zooming so a tricky wind and I think they dealt with it a bit better than us. They had some fantastic pulls that went out on the sideline and trapped us really quickly, made it difficult to even get started.

“As a group I think we’ve had the best week we’ve ever had as a women’s team other than 2019. We’re having a great time, we came with no expectations and wanted everyone to play, play against teams we’ve never played against before and play competitively. I think we’ve done that and we’ve turned up to every game, given really good fights and won battles against teams we knew we could beat and given good battles to the top teams. This is our home ground so to speak but when we go abroad we have to deal with everyone else’s still weather and this time maybe we have some of the advantage.

“We’ve said the whole way through we’re going to have a nice time and we win and lose as a team. As long as everyone is enjoying it that’s enough for us.”

Soar! *sore player Brooke Wooldridge was equally happy, and looking forward to the next stage of the competition:

“The game was absolutely terrific. We had such a great game against the home team, we are so grateful to be here in the first place and in terms of a quarterfinal game they fought until the end and we were very happy with our performance. Obviously we still have more games ahead of us and we are looking forward to tomorrow.

“We come from Texas and the conditions there can be very windy. In preparation for the tournament we have been practising together, we played for the first time as a team last year in June for USAU masters nationals. When we learned we had gotten the bid in winter of 2021 we decided to take it very seriously and we’ve been practising together in winter and spring. We’re pleased and think it’s paying off.

“This is not an extension of an existing club team, our captains Hien [Le], V[eronica Coombs] and Maricar [Lafita Navarro] decided to put this masters team together last year. For me, a player who’s trying to get to the highest level they can, I can’t speak highly enough volumes about the work they did in getting it together in order to get us here.”