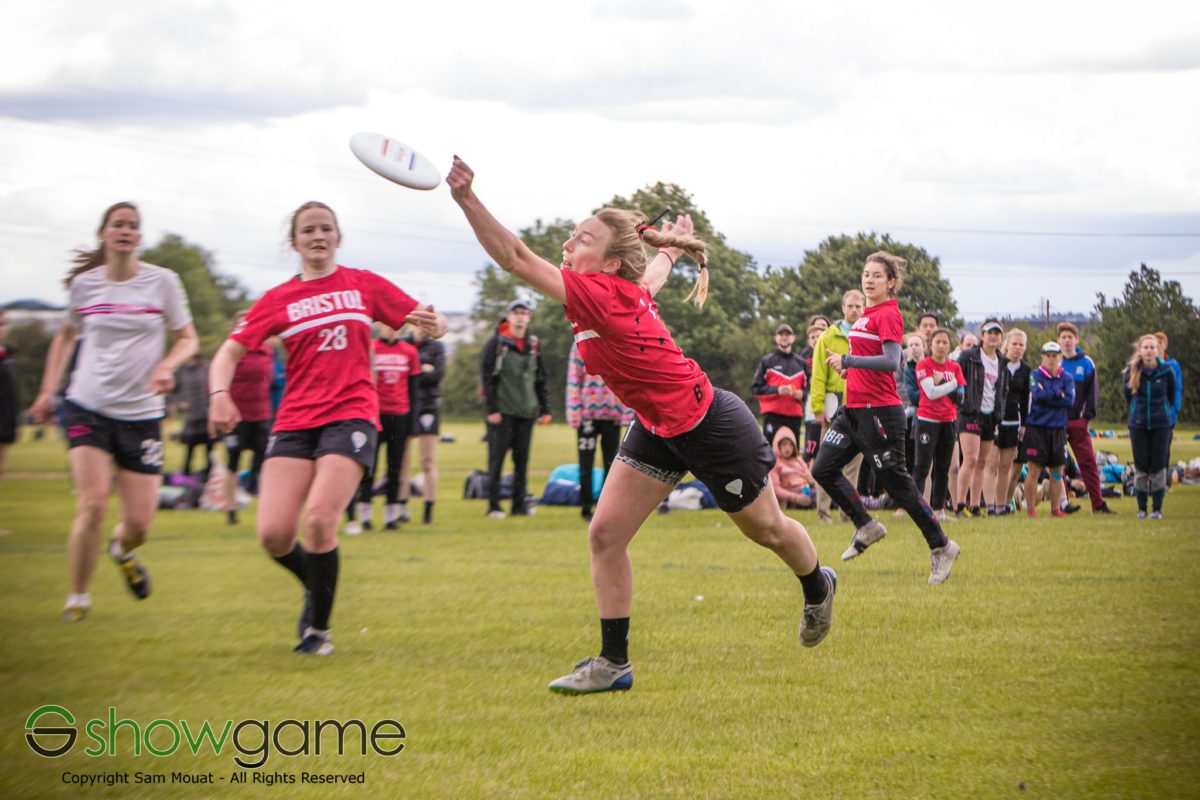 Making her ShowGame debut aking a look at the Windfarm women’s division is Marina Symington, who’ll be covering WMUCC in Limerick for us later this month!

After several years of either cancelled or scaled-back events, Windfarm 2022 marks the first full-scale Tour event in close to three years. A total of 63 teams across all divisions travelled to Nottingham’s familiar Riverside Sports Complex for a weekend many will have been delighted to see return.

The women’s divisions featured a nice spread of the familiar top British teams, as well as newly formed Horizon, junior players from GB U20s, and Dublin Gravity and Masterclass coming over from Ireland. Let’s take a look at a few highlights as these players converged in the Midlands.

The reigning national champions proved themselves still dominant, prevailing in the same city as their 2021 national title. Their road was not without some tight games. In the pool stages they finished second in their group, comfortably beating Thundering Her but having lost 12-11 in a tight match against a Masterclass team that featured Irish stars Sarah Melvin and Fiona Mernagh in a squad featuring a number of other Irish national team veterans. Wins against Dublin Gravity and SMOG then saw Bristol facing Masterclass for a second time in the semis. After another close game, Bristol came out on top this time, winning 15-14 and securing their spot in the final against SYC. SYC’s route to the final was also not plain sailing. They lost to their big rivals Iceni in the pool stage, but then went on to beat them the second time they met, this time in the semis, reflecting just how tight the competition is between the top few women’s teams. Bristol’s experience and composure in the final ultimately saw them victorious once again, with World Games players Carla Link and Molly Wedge again central to their success after being absent for other tournaments this season. Perhaps this sets the tone for what we can expect to see more of from Bristol.

SMOG dominate in their pool but drop a few seeds

The next pool saw SMOG face SCRAM and Cambridge Women. The women from SMOG, a club who we typically see dominating in mixed, had comfortable wins against both other teams. In their last game on Saturday, they lost a tight match against LMU in a pre-quarter crossover. Sunday then saw these two teams come head-to-head once again in their final game of the weekend. This was another close one, with SMOG coming out on top this time, winning 11-9, placing them fifth and leaving LMU, who had come in as fourth seed, in sixth place.

Arguably the toughest pool in Division 1 featured London rivals SYC and Iceni, alongside Dublin Gravity. This was unfortunate for a development Gravity team, who had to face eventual second and third placed teams right off the bat. Their luck didn’t improve as they then had to play eventual winners Bristol in the crossovers, putting in an impressive performance and narrowly losing only 12-10. This, however, put Gravity in the 9-16 bracket, where they dominated in their next three games and comfortably took ninth.

Close competition in the middle of Division 1

The final pool in Div 1 contained LMU, Spice and Reading. LMU narrowly beat Spice and both teams beat Reading, ranking the three teams LMU, Spice then Reading. Reading had to play both Spice and LMU again on Sunday, where they lost to both again. The three teams finished the tournament sixth, seventh and eighth in the same order they ranked in their pool. This is only the second season for Spice, who are heading to worlds this summer and might have hoped to cause more upset in the top of Div 1. They did get the opportunity to play both SMOG and Masterclass, which will have been good experience for them going forward this season.

Cambridge and Thundering Her displaced from Division 1

The bottom two spots in Div 1 were given to Cambridge Women and Thundering Her (the women’s entry from mixed team Thundering Herd). Both teams had a tough time in their pools, facing some of the best talent in the country. Cambridge were missing some of their key players that lead to this season’s indoor success and had teamed up with women from RED to field a full roster. Thundering Her also struggled in their pool, but then faced some closer matches on Sunday. After losing to Flamingos (the Flyght/Lemmings joint team) they went on to convincingly beat GB U20 women and finished the weekend with a narrow win against Horizon: Forbidden West to take 13th.

It’s worth also mentioning the success of the brand-new women’s club, Horizon. Formed this year with the hope of filling a gap in women’s ultimate in Yorkshire and the North, they managed to enter and incredible three teams to their debut tournament. The three teams were not ranked on ability, with the more experienced players instead distributed across them. Nonetheless these teams were not out of their depth. Horizon: Zero Dawn even went on to finish 12th, putting them at the bottom on Div 1. The other two Horizon teams finished 14th and 17th, firmly establishing Horizon as a club to be taken seriously moving forwards.

Needless to say, overall Windfarm was a great success for the return of Tour and an exciting insight into what this season will bring. Congratulations to all the teams that took part!