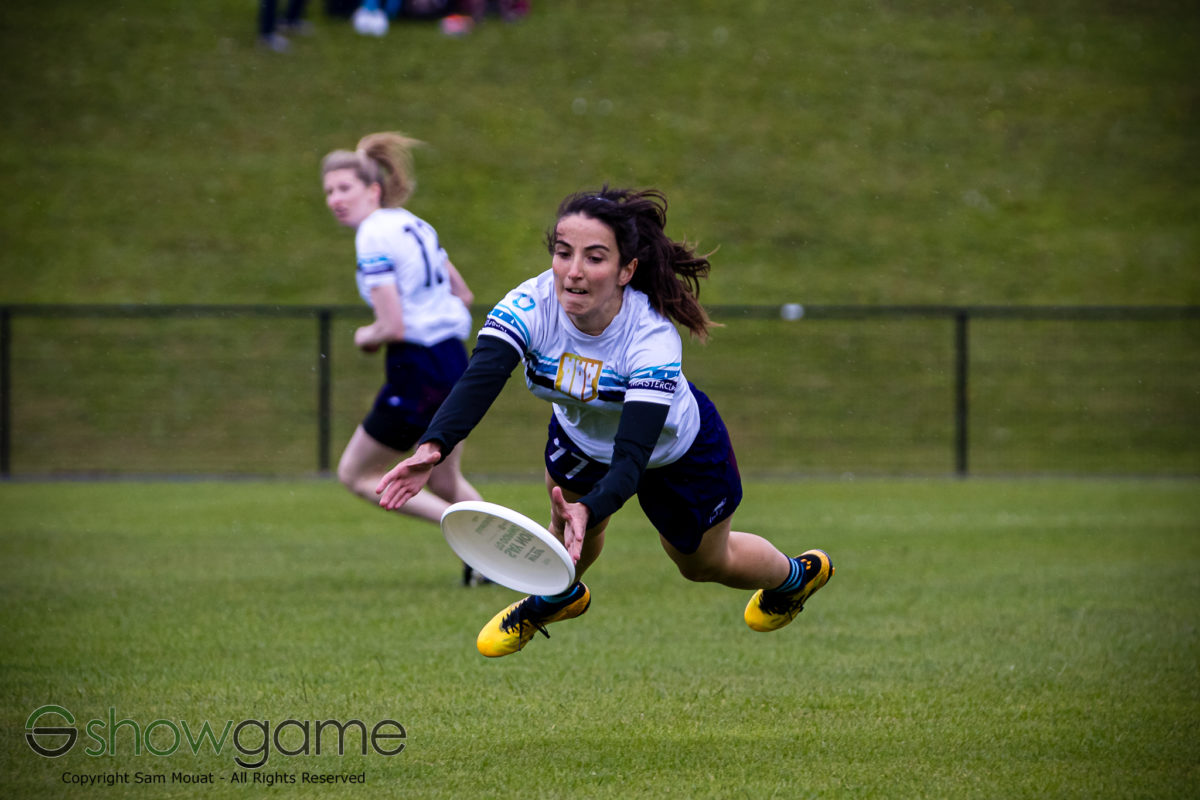 WMUCC 2022 kicks off with a showcase match from the women’s division. The Irish home team, Masterclass, faced StellO from Canada’s capital Ottowa.

StellO had the first pull, meaning that Masterclass started on offence going downwind. The first point was long, with both teams struggling to complete passes in very wet and windy conditions. Deep shots failing to find receivers were common from both sides to begin with. StellO eventually managed to get the score, a huge boost for them having started both on D and going upwind.

In the first few points we continued to see plenty of “huck and D” type tactics, with players attempting to get the disc down the field, even if it came at the expense of losing possession. When they had possession, it seemed that Masterclass players were looking up field with no good options and StellO eventually scored again, making it 2-0.

Masterclass then had the wind with them, and the connection of talented Irish veterans Fiona Mernagh and Sarah Melvin allowed them to reel in their first score, taking it to 2-1. StellO then scored again, making it 3-1, and soon looked like they were going to put in another one, but they called a timeout just short of the endzone line. This didn’t pay off for them and after a few more turns, Masterclass scored to bring them to 3-2.

Points so far had been long, and all but the very first point were scored downwind. The upwind team was typically finding themselves stuck on their own endzone line, unable to move the disc very far up the pitch. StellO stuck to playing slightly poachy defence, while Masterclass mostly played their zone.

The teams continued to trade over the next couple of points as the wind made it incredibly difficult to get a break. StellO were very patient working it around Masterclass’ zone and a few points later the score stood at 5-3. Masterclass scored again with O’Mahony taking a shot into the endzone and finding a McMorrow laying out to make it 5-4. Despite this, the strong wind meant Masterclass were unable to equalise and StellO instead took it 6-4 before half time was called 55 minutes into the game.

After seven minutes break, StellO came out on offense going downwind. This point was long, but eventually won by StellO, who then quickly put in another to take the score to 8-4 and widen the gap.

Masterclass, however, did not give up and a great read from Jen Kwan allowed her to poach off and get an unexpected turn. The disc then quickly made its way upwind towards the endzone, where Melvin reeled in another score, taking it to 8-5.

Masterclass then had both the momentum and the wind with them, allowing them to score again, making it 8-6. There were then some promising connections from the Masterclass players, but they couldn’t quite put in the upwind break they needed. The two teams then traded again in a series of quick points, taking the score to 10-8 to StellO after a bold hammer from Masterclass’ Kwan across the endzone and into the hands of McMorrow.

After another slightly longer point, StellO’s Rioux put one up for Polowyk to make it 11-8 just before the soft cap went. The rest of the game felt like Masterclass had slightly lost momentum. StellO scored again, confirming that it would be a game to 13. At 12-8, Masterclass would have had a lot of work to do if there were going to pull this back. It wasn’t long, however, before StellO scored again, with Green coming down with the game-winning catch, ending the game at 13-8.

Although the score got away from Masterclass slightly at the end, this match was closely fought as both teams got accustomed to the wind and rain. The women’s division is organised into two large pools, with nine teams in each. This means both Masterclass and StellO could go on to do well in their pool, but we’ll have to wait to see how things play out.