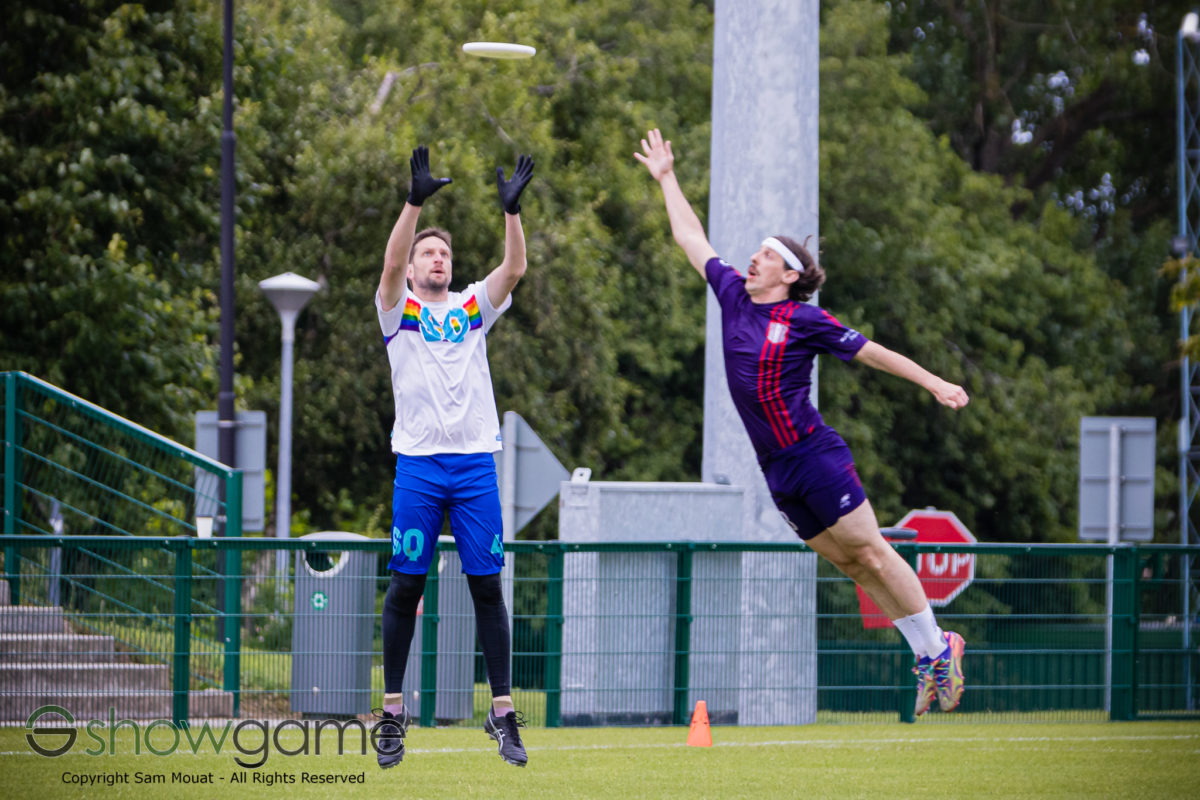 The home team in the masters open division, Masterclass, have had a tough time so far competing against top experienced players from all over the world. Today they headed into the day facing Status Quo from Australia. Their hopes of getting their first win were not realised, however, after they failed to fully recover from going a few points down near the start of the first half.

Status Quo started on offence and quickly made a series of short passes before putting a shot into the endzone that was unable to find the hands of a player in white. Masterclass then had the chance to secure an early break, but they lost possession. Owen Shepherd popped a scoober over the top of a Masterclass player to Adam Woods, who came down with the first score for Status Quo.

Masterclass quickly came back out with a big huck to McAlester who passed the disc on to Kelleher to equalise at 1-1. Status Quo got the disc back after a turn and put the score in which put them ahead at 2-1.

It was a game of hucks.  Masterclass came out and attempted another long one, but again there wasn’t a receiver in the right place to reel it in. Status Quo player Woods fumbled a catch, giving Masterclass another opportunity. They tried almost exactly the same shot, but the disc was once again out of the reach of Mark Earley in the endzone.

Having worked it back down to the other end of the pitch, Vidler threw a massive hammer across the endzone and into the hands of Jaric to make it 3-1. Status Quo then put in the next one too to widen the gap and make it 4-1.

Masterclass then started to switch on a bit more. Kelly read a high disc well and caught it by his fingertips just short of the endzone and dished it to McAlester to make it 4-2. In the next point Status Quo were all crowded around the endzone line, but they managed to jam one through the Masterclass defenders to give them a three-point lead once again.

Masterclass scored the next point and the two teams continued to trade over the next seven points downwind until half time with Status Quo ahead 8-5.

After half time, Status Quo came out on defence, playing match. But Daragh Kelleher escaped deep and Masterclass quickly scored to make it 8-6. Masterclass were now back on defence and set up into a transition zone that switched to match marking after five passes. Owen Shepherd managed to break free up the line which opened up the field, and a few passes later Status Quo had scored again to take it to 9-6.

Another point each and the three-point gap remained at 10-7 to Status Quo. The next point was long. Wolckenhauer from Masterclass boosted one deep, but it landed out the back of the endzone. Status Quo hucked the disc back to Jaric, who was wide open, but it hung too long in the air, giving Wolckenhauer the chance to catch up swipe the disc away. Masterclass unfortunately threw the disc away again, however, and Status Quo took the point with the next possession, extending their lead to four points.

Masterclass called a timeout and came back out with a renewed sense of purpose. They scored the next two, closing the gap to 11-9. Masterclass then had an opportunity for another break after Rob Kiely got a hand block on Status Quo’s first throw off the pull. They were unable to convert this, however, and Status Quo went on to score the next one, as well as a further break after that, re-establishing the four-point lead at 13-9.

The next three points were traded quickly, with both teams taking advantage of the conditions when they were going downwind. This put the score at 14-11 shortly before the time cap. Masterclass didn’t give up and came back out fighting on defence. After a fumbled catch from Status Quo, Masterclass used the opportunity and Pierce laid out to secure 14-12.

It was only a matter of time, however, before Status Quo were able to close out the game. Owen Shepherd managed to release a filthy inside-out forehand break, which found Anthony Dowle in the endzone to finish the match 15-12.

After the game I got the chance to speak with Status Quo’s captain, Owen Shepherd. I asked him how he was feeling after their win: “Really positive. I’m glad we could come out and play good defence and good offence. We also particularly enjoyed playing this team because we have some friends who play for Masterclass.”

Status Quo are an Australian team, mainly based in Sydney, but they also attract players from Brisbane and parts of southern Queensland. Their national series is over for this season, so these guys have already had time to gel as a team. With three wins and two losses to far, they will qualify for top 16 and head into the pre-quarters on Wednesday with hopes of doing damage in the top bracket.