There’s something quite beautiful about hat tournaments. At a hat tournament, you sign up as a single player, rank yourself on some delightfully arbitrary scale, and then get sorted into a team of people who you’ve probably never met before. You then play together, party together, play some more together and then go back home; probably never to play with those team-mates again. You take nothing back with you except an odd coloured shirt, possibly a prize or two and a vague recollection of enjoying yourself over the weekend, though doing what you can’t quite remember.

So why are they so great? Hat tournaments help remind you how Ultimate is bigger than just your club or uni team. Open to GB players and beginners alike, they have a very wide audience, from the high level athlete looking to escape from the pressures of tour, to the complete amateur (probably dragged along by a friend) discovering Ultimate for the very first time. They tend to be very well run, are always entertaining, always have a great party, and tend to have a wide variety of prizes too.

There are four major hat tournaments to watch out for in the UK this Summer, each with their own characters and personalities. Your loyal reporter has spent some time sitting down with the TDs of each to find out the facts, figures and the fun of hat tournaments.

So, what makes you unique then?
2014 sees the re-birth of the Durham HAT. As one of the oldest and biggest HAT tournaments in the UK the Durham HAT has a strong Frisbee pedigree.  After last year’s hiatus the Durham HAT 2014 will see all the best bits of previous tournaments all wrapped up in Phoenix Knights Style. More fun, more colour, more entertainments but all the same high quality Frisbee. Open to beginners and experienced players, we cater for all.
We bring you 24 teams, games, a party that will be a Knight to remember, prizes galore and oh yeah, a bit of Ultimate on the side. Included in the price is your very own Lookfly performance HAT shirt, camping near the pitches with full facilities, Saturday dinner, pitch-side music, a Friday arrival party and naturally the massive Saturday themed fancy dress party as well (and much, much more – but we’re not going to tell you everything at this stage!) 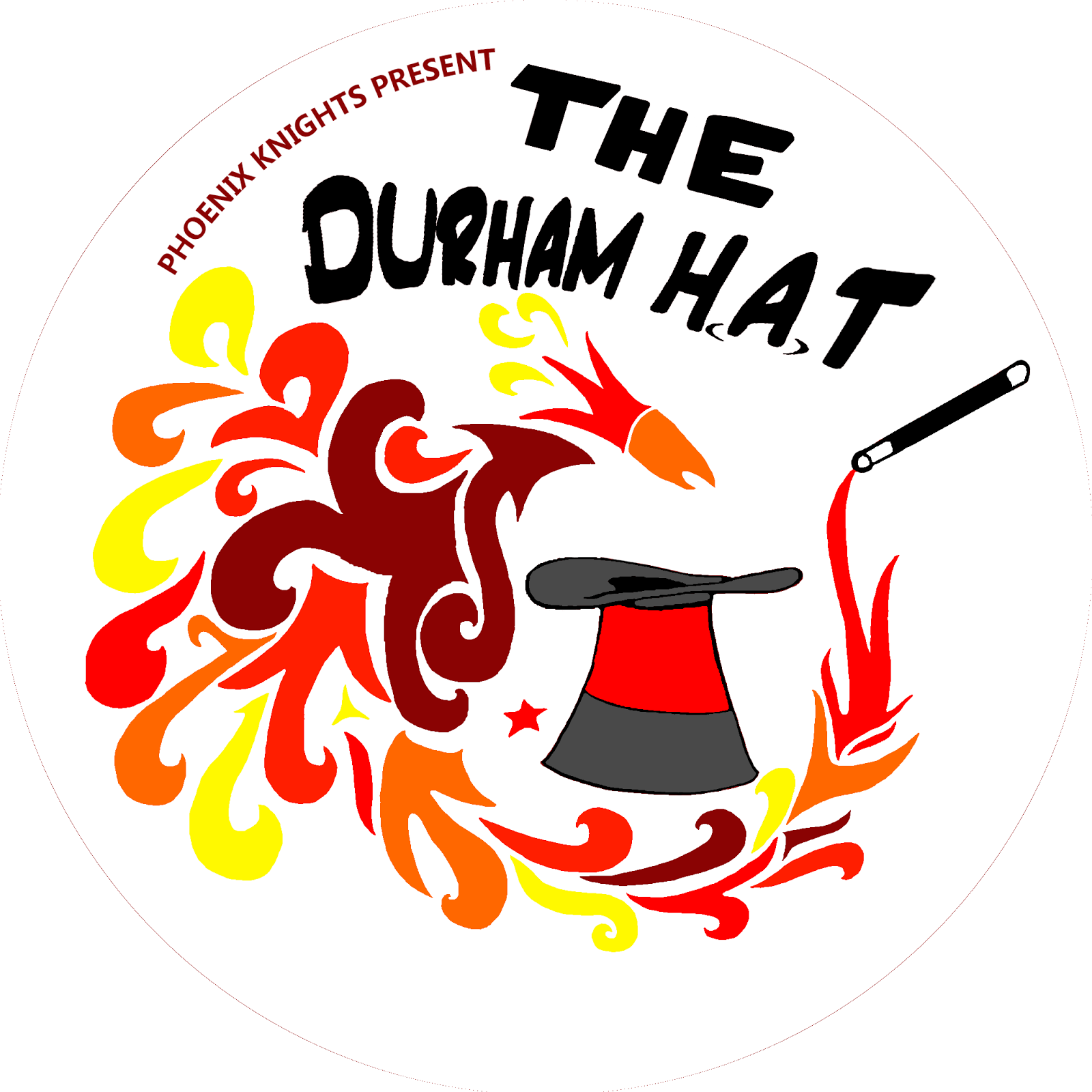 This years theme is Myth, Mystery & Magic. Expect the unexpected – we’ll be featuring a full Quidditch pitch, a mystery challenge running through the weekend with equally mysterious prizes, a private themed costume party and much more besides: join our Facebook group to stay on top of all the surprises.

tSG Review:
After a year out for Durham, Phoenix Knights (combined with DUF) are aiming to put on a spectacular show, and looking to live up to their name by reviving the Durham hat back from the embers to retake it’s place as one of the highlights of the Summer in a blaze of glory (end of phoenix analogy). Even if you haven’t heard of the Knights before, be aware that Durham has plenty of alumni and college players, so they’re going to have all the help and advice they need to really make a mark on the Summer. However with a very early sign up (and a lot of keen interest already shown), make sure you sort yourself out fast to secure a place at what looks to be a fantastic tournament.

Very Likely Tournament Date: 19/20th July 2014
Sign-Up Date: March (International players with flights to sort can email for early sign up)
Cost: TBA (Last Year: £33 + £8 for a disc)
Capacity: TBA (Last year 288, but looking to expand due to phenomenal demand!)
Tournament Directors: Rich Harrison, Alan Heckman
So, what makes you unique then?
I think the first year was so successful as it was mostly run by ultimate players who’d never been to a tournament before! They didn’t really know what was expected, so went all out and they blew the players’ expectations out of the water. As we’ve expanded year on year we’ve been able to build on previous years’ successes to go that extra mile every time. The word is definitely spreading – we thought a two and a half hour sell-out was great in 2012, but nothing could have prepared us for a four minute sell-out in 2013!

We’re lucky to have an army of willing volunteers who pour their heart and soul into providing the best tournament experience we can. Their only reward is seeing the players having a great time. We do it because we love it!

We try very hard to create a welcoming atmosphere for players of all abilities. Some of the players throw a Frisbee for the first time on the morning of the tournament, whilst some have played for years at a high Tour level, or even internationally. And of course, there’s a massive range of skills and experience in between those two extremes! See you in July!

tSG Review:
DUFFA set a reputation last year for the biggest, loudest and most popular hat tournament in the UK. With countless extra activities to do between games (3 pint challenge table and disc accuracy competition shown above), a huge party in an outdoor marque and one of the strongest international scenes in any UK tournament, last year DUFFA is staked it’s claim as *the* hat tournament of the Summer. However, with an incredibly fast sell-out time last year and this year looking to be busy too, make sure you keep very up to date with any updates they give. Also, they give a wide variety of very good prizes. Just sayin’…

Sounds fantastic, where can I go to find out more?

So, what makes you unique then?:
Manchester hat is only in its second edition after a very successful début last year. It is a small, intimate hat tournament (120 people limit) which means everybody gets to know everyone and it creates a very friendly atmosphere. It also means everyone can fit into the combined bar and dance floor area of the Rugby Club, ensuring a really personal party experience with the entire tournament.

We have evening activities for you to bond with your team, last year this was a pub quiz and a school sports day (think egg and spoon races and three legged races!). This year there will be similar things!

Manchester Hat has great prizes, last year this included Manchester Hat trackies and boot-bags (and naturally prizes of alcohol for anyone who won a school sports day event – got to keep it realistic after all!).

This years theme is Fairytale, so Knights, Princesses and Dragons! Hope to see you all there.

tSG Review:
Manchester Hat was an oddity in the tournament scene last year, and we absolutely don’t mean that in a bad way. Due to the combined hat format, relatively small size and excellent organisation and extra activities, it really was the tournament that you bonded most with your team for. It felt the most like an entire tournament enjoying Ultimate together, and it did feel like a community for a weekend. It’s not what everyone looks for in a weekend of Ultimate, but for its first year it sure found its feet quickly. Expect big (well, small but well organised) things on its second outing.

So, what makes you unique then?
2014 will be the 5th Sheffield Hat, and the 3rd year at the current venue in Hillsborough. It is different to all the others because the venue is small so we use BULA (beach) sized pitches and play 5v5. That’s right: 5 a side on grass!

We also raise money for charity; previously Right To Play and Access Sport but this year we will be supporting someone local to the event. A small % of the player fee goes to charity and any other amounts we can raise over the weekend. We always have a show-game on Saturday evening and spectators have the chance to raise money and have fun through playing Fantasy
Ultimate (with a cash prize on offer too!).

We always incorporate other disc games too, in 2013 we had a DDC pitch and held an accuracy competition. We hope to have at least the same this year, hopefully some disc golf too.
Lookfly have been fantastic supporters of this event since the beginning and in 2013 they provided Spirit and show-game prizes.  Catch The Spirit were also very supportive in 2013.
The other way we’re different is that there isn’t a big party (shock!).  This is a pretty chilled out weekend to finish your season so we just relax in the bar with some pub games until they close, then potter to bed.  We are planning an alternative option this year as well, likely discounted entry into one of Sheffield’s top nightspots so don’t be put off if you only go for the parties!
Anything else?
I think Hat tournaments are great (the Melbourne Hat was one of my first tournaments) and it is good that there are some successful ones in the UK.  DUFFA goes from strength to strength and it’s certainly good to see Durham back this year.  They all offer something different, but are equally all a great way of meeting new people and practising those Frisbee skills!

Sheffield Hat 2013 managed to raise £347 for Access Sport last year
tSG review:
Sheffield Hat’s strength lies in the fact it’s at the end of a season. It’s the perfect way to wind down from an intense summer of Ultimate, play some great games and in fact just relax with all the people you’ve probably been playing against all season. Whilst it is normally at the same weekend as Glastonbury, it’s relatively accessible location and extra touches (naturally I’m a fan of the show game, and the related Fantasy Ultimate was a personal highlight) mean it’s certainly proving more and more popular each year, and deservedly so.
Sounds fantastic, where can I go to find out more?
Twitter: www.twitter.com/ninety2ultimate
Website: www.ninety2ultimate.com/sheffield-hat
E-mail: simon@ninety2ultimate.com

In all, it’s been great to see that Hat culture grow in the UK over the part few years. I’ve personally been to everyone one of these, and loved every moment. Each tournament really does have it’s own culture and flavour, something which in no doubt thanks to the phenomenal effort placed into organising these things by the TDs, and of course the teams behind all of them. So there’s no way I’d rather end than by wishing them the best of luck in the future, and thanking them all for their effort they put in to making these things happen every Summer. Really, hats off to you all. Now see you on the pitch.

Did you go to any hat tournaments last year? Are there any we’ve missed out? Do you have any memories from previous tournaments you’d like to share? Please comment below, we’d love to hear from you.

One thought on “Your Guide to UK Hat Tournaments”